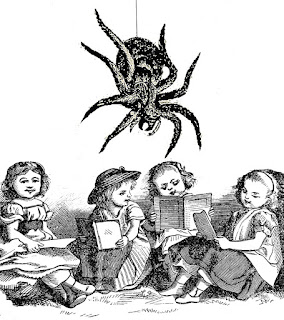 New Babbage, NB — Some heed is now being paid toward Mad-Tongued Moe, who regularly accosts sightseers along the Port area with his often bizarre predictions of doom and plague.  For, recently, with yet another wave of vermin infestation ravaging the city, his rantings are seeming to take on a decidedly more realistic tone.

Readers, this reporter is certain, do not need to be informed that the new threat is of an arachnid nature; the city is fairly abuzz with rampant rumor concerning recent events.  The New Babbage Free Press has struggled valiantly to separate fact from fancy, amongst all the hyperbole.

Dr M Muggins, New Babbage City Coroner, has confirmed that the recent deaths were due to a combination of arachnid venom poisoning, and acute blood loss.  'I will agree that these deaths were due to what appear to be spider bites, but I refuse to speculate on the alleged size of these [redacted] spiders.' Dr Muggins was quoted as saying, earlier today.

The size of the arachnids in question is the heart of much of the speculation running rampant in the saloons and public houses of the city.

One alleged eye witness to the size of the arachnid described a bizarre encounter to the Free Press: 'Yes, I met the spider ... she was very very nice. She spoke to me, I was so honored to meet her.  She was big.  Real big.  Like big big.' said a young unfortunate named Petunia, to a reporter from the Free Press at an earlier date.  She recounted that another unfortunate, known only by his street name of Low Key, who dwelled in an ersatz dwelling in the sewers beneath Clockhaven, was driven from his home by the vermin.

Mrs U Flaxenbrass, of Prince Dakkar Blvd in Clockhaven was more appalled to discover young children were camping out beneath the streets, than she was to hear about the vermin. 'Think about it, eating down there, playing down there... good lord, have you seen how they play? That's city water down there, the very thought revolts and repulses me ... those spiders? No, I don't believe they exist at all.  It's all a false flag operation for the Unterby office at City Hall, that's how it works around here.'

Mr O Unterby of City Hall was not available for comment at the time of publishing.  There has been no indication as to when the arachnid infestation might be brought under control.  The Free Press will stay on top of this story as it continues.