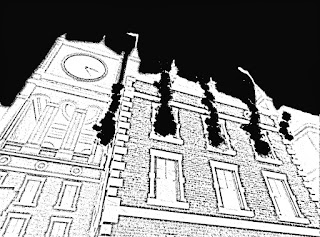 
NEW BABBAGE, NB —  The new year rang in on a sour note in central New Babbage, as City Hall erupted into towering flames, choking the skies with pungent acrid black smoke.  Curiously, simultaneous with the fire, City Hall was likewise barraged by torrential flooding.  Officials seem at a loss as to explain what exactly happened.

Witnesses report seeing smoke bellowing from a third floor window, while some also reported an airship looming in the skies overhead.  Miss F Bucksimbodom, secretary to Mr O Undorby, assistant to the Mayor Mr M Tenk, was quoted by the Free Press as saying, 'I heard some odd sounds in Mr Undorby's office, some thumping ... [My Undorby] was already very agitated because he thought someone broke into his office earlier this week.'

Miss Bucksimbodom, and others, stated that a masked duo allegedly appeared to assist with the evacuation of the rapidly deteriorating building.  The two apparently went by the sobriquets of "The Night Crusader" and "The Blood Avenger", and opinions vary amongst eyewitnesses as to the authenticity of the pair's attempts at assistance.  A Mrs M Vanderklampt of Wheatstone said, 'The two seemed to be escaping the fire, not assisting with the evacuation.' while a Mr R Bladderstick of no fixed address said, 'Dey call down ter us all, waved real nice, said ev'rytin' would be dandy, made me feel lots better, it did.' [sic]

City Hall has, for the time being, been considered condemned.  All official business will be conducted at offsite locations.  Mr Undorby was unavailable for comment at the time of publishing.
Posted by O.B. Penrose at 15:07