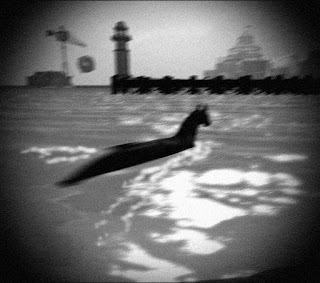 
CLOCKHAVEN, NB — A photograph was recently taken by an anonymous source which allegedly depicts what has been dubbed the Clockhaven 'Harbor Horse' by eye witnesses.

The photograph, which is now known as 'the Doctor's photograph', is rather grainy and blurry, yet distinctly shews a dark object seemingly moving through the frigid murky waters of Clockhaven Harbor in broad daylight.  Two appendages can be made out on top of what is purported to be the creature's head—the 'ears' or 'horns', those who have spotted the mysterious creature have marveled at how the beast resembles a land horse, resulting in its moniker of the 'Harbor Horse'.

Sightings of the creature have reportedly gone back decades.  The earliest recorded sighting being in 1792, when the creature was alleged to have leapt from the brine of the harbor and lumbered up Doagrun Road on paddled legs, where it reportedly battled a clockwork bear in Market Square.  The end results of that battle are hotly disputed by historians.

Dr T Frang, New Babbage zoologist, denies the existence of the Harbor Horse.  "If such a creature existed, I would know about it.  Believe me, I would love for it to exist.  My granny used to keep me awake at night with stories of the Harbor Horse, but it's sadly a myth." he stated to the Free Press earlier today.  When asked for an opinion on the photograph, he responded: "It's a submersible of some sort.  They are all the rage these days."

Citizens have been besieging the harbor with harpoons since news of the photograph broke on the streets days ago.  None agree on exactly what the creature may be, but all seem to agree it will probably be delicious.  "Anything's an improvement on wiggyfish." said Horace Franklin, of Coronet Gardens, to the Free Press.

Reports that the alleged creature feasts solely on human flesh have remained unconfirmed at the time of printing.