NEW BABBAGE, NB — The soft winter silence of the borough of Clockhaven was disturbed late yesterday afternoon by the complete and utter collapse of Wexholm's Emporium on Prince Dakkar Blvd, which fell in on itself, taking a large portion of the sewer system with it.

Low ominous rumbling sounds and minor quakes have been plaguing the east end of New Babbage for close to a month.  Those who had hoped the sounds and tremors were merely remnants of the January Marsh Gas were dismayed to discover otherwise yesterday, as the ground suddenly yawned open, taking the entire structure down with it.

Despite the collapse transpiring in mid-afternoon, it seems fortunate that no customers have been reported as injured or missing, though Emporium proprietor Mr B Wexholm is currently reported as missing.

City officials would give no official comment on the disaster, apart from the investigation being ongoing, though many have stated to the Free Press that the land beneath Clockhaven is honeycombed with passages and tunnels.  "It's a wonder the whole neighborhood didn't go down," stated one citizen, who wished to remain nameless.
Posted by O.B. Penrose at 07:49 No comments: 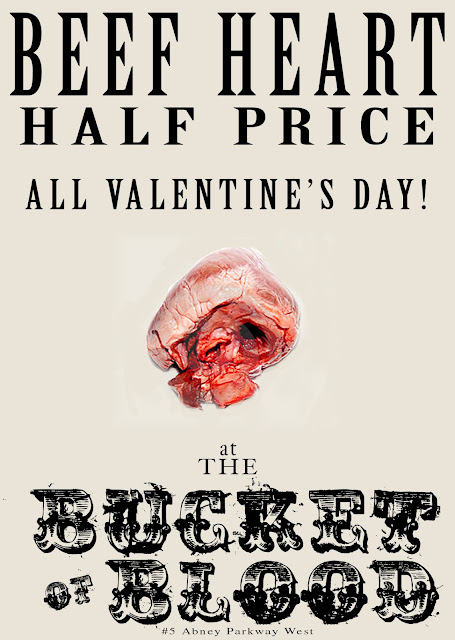 Who Is The Straw Man? 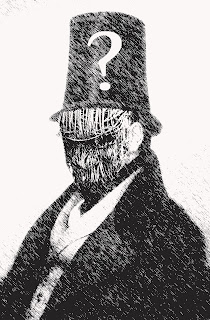 SHADOWY FIGURE KNOWN ONLY AS THE STRAW MAN

MILITIA POWERLESS TO STOP HIM?

NEW BABBAGE, NB — The North Fells Track Bomber, Mr E Grady of Phaeton's Landing, was merely a contract worker for a New Babbage villain known only as 'The Straw Man', the New Babbage Free Press has learned, through a trusted source.

Few details about the arrest and interrogation of the bomber have been released to the press since his arrest last month -largely lost in the abject madness and confusion of what has come to be known, ominously, as Marsh Gas January- but the a trusted source has stated that while the Militia was able to squeeze very little information from the bomber, they were able to ascertain the nom de plume  of the entity who the dangerous gentleman worked for, someone known in the underground as The Straw Man.

Allegedly the bomber never met The Straw Man face to face, and so cannot comment on who this shadowy figure may be, or even what his intentions are, twisted though they may be.

The New Babbage Militia was unavailable for comment at the time of printing.
Posted by O.B. Penrose at 07:22 No comments:

NEW BABBAGE, NB — The annual pancake toss race was held again yesterday afternoon in the Academy of Industry district of New Babbage.  This was the third race of its kind, which is held each year on Shrove Tuesday, commonly known as 'Pancake Tuesday'.

Attendance was impressive as crowds flocked to witness the race which was, as always, held in three parts, those being: The Children's Race, The Adult's Race, and finally, the Adult and Children's Race.

Some in the crowd questioned whether there ought be a race strictly for clockworks and automatons, as with their flawless mechanical parts they present an unfair advantage over the hardworking humans who bring them into existence.  This may well be, but the Free Press would suggest that since no prizes were awarded the event was all in fun and should remain in such a spirit.
Posted by O.B. Penrose at 07:11 No comments:

MARSH GAS DRIFTS IN FROM FELLS

NEW BABBAGE, NB — If modern science can be believed, a curiously pernicious vapor drifted recently into the city of New Babbage, causing wild and widespread hallucinations in its citizens.  This mist, it is said, is to blame for the questionable decisions leading to the recent curfews and the bizzarre and extreme reactions which followed.

The hallucinations are apparently the result of a condition known as hyperboliosis, which was caused by extensive inhalation of vapors believed to have originated in the Fells, north of the city.  The effects, according to Dr S Thornley, are wild hallucinations and extremem reactions to the hallucinations.

'Mass hallucinations are not at all uncommon.  The good news is, no permanent damage has ever been reported connected with hyperboliosis,' he said earlier today to a representative of the Free Press, and continued, 'however, it is important for citizens to maintain a skeptical attitude toward any memories they may harbor about the last 30 days or so.'

Dr M Miggins —New Bababge Coroner and physician for over 25 years— claims not to be familiar with any condition, defect, or disease, known as hyperbolios.  He stated, 'It doesn't mean anything.  The word is meant to sound greek, but it's nonsensical twaddle. There is no such condition.'

Regardless, vaccinations will be available, gratis, at City Hall throughout the first week of February.
Posted by O.B. Penrose at 13:25 No comments:

Reporter Locked Out Of Office

NEW BABBAGE, NB — The madness of the recent weeks in the city reached its crescendo late last week, when Mr B Heed —owner and proprietor of the Bucket of Blood Public House on Abney Parkway West, in the borough of Coronet Gardens— changed the locks on the offices of the New Babbage Free Press, which shares the same property.

Mr O Penrose —publisher, editor-in-chief, and primary reporter for the New Babbage Free Press— was quoted as stating, 'It started with Mr Mornington and his annex, then the folks at the Gangplank jumped in.  It wasn't long before Mr Heed named his property Bucket Land.'

Based on the inked refuse left behind in the offices, now re-opened thanks to the Mayor's Office, it is thought that Mr Heed attempted to publish his own newspaper in the interim, but was unable to properly engage the delicate and complicated equipment therein.

While the damages to the office itself were significant, the long-term damage to the essential machinery was minimal and Mr Penrose assures the Free Press that the Free Press will be up and running at regular speed forthwith.
Posted by O.B. Penrose at 06:13 No comments:

Sought:
1. Salvagers, to remove ruins of ominous old occultist hall and any attendant gods (as is practical).  Must provide own steam crane.

3.  Ordained cleric, to bless foundation of ominous old occultist hall in preparation for new construction.  Must be qualified to exorcise and/or evict any lingering deities, spirits, nightmares, dinosaurs, crabs, assassins, zombies, or other manifestations of evil as appropriate or necessary.

4.  Construction gang.  Must provide own tools.  May camp as necessary.

Pay:
Negotiable in each category.  Please note that there will be no loss-of-immortal-soul benefit paid to survivors.  Bid at your own risk.